(Come in under the shadow of this red rock) 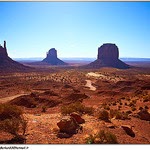 What are the roots that clutch, what branches grow
Out of this stony rubbish? Son of man,
You cannot say, or guess, for you know only
A heap of broken images, where the sun beats,
And the dead tree gives no shelter, the cricket no relief,
And the dry stone no sound of water. Only
There is shadow under this red rock,
(Come in under the shadow of this red rock),
And I will show you something different from either
Your shadow at morning striding behind you
Or your shadow at evening rising to meet you;
I will show you fear in a handful of dust.

These lines have lingered in my mind the past few days. Eliot wrote The Waste Land in the years following the First World War, when the landscape of humanity seemed perhaps particularly stark and bleak. The poem resounds with disquiet and despair: all glimpsed respite turns out to be illusory or faltering; it seems improbable that any grounds for real hope exist at all. Eliot himself was in a season of 'religious seeking' -- a long and involved grappling which was to culminate eventually (in 1927) with the decision to become a Christian. His writing, accordingly, is rich with varied religious allusion and awareness...but hesitant, and skeptical, at this stage in his exploration of faith.

The 'shadow of the red rock', for example, is almost certainly a reference to Isaiah 32...

Behold, a king will reign in righteousness,
and princes will rule in justice.
Each will be like a hiding place from the wind,
a shelter from the storm,
like streams of water in a dry place,
like the shade of a great rock in a weary land. (Isaiah 32:1-2)

This passage (as much of Isaiah) is usually understood in a Messianic context -- and subsequently, by Christians, as a pointer towards Jesus. Matthew Henry's 18th century commentary, for example, offers the following explanation:


Christ our righteous King, and his true disciples, are evidently here intended. The consolations and graces of his Spirit are as rivers of water in this dry land; and as the overhanging rock affords refreshing shade and shelter to the weary traveller in the desert, so his power, truth, and love, yield the believer the only real protection and refreshment in the weary land through which he journeys to heaven. (Matthew Henry, Commentary on the Whole Bible, 1708-1710)

For Eliot's narrator, though, there is uncertainty and fear associated with the promised shelter. There is something decidedly threatening about the fact the rock is red. It may be the best offer of refuge available, but there is a sense of foreboding that it too will turn out to be inadequate at best, or maybe even perilous; just one more broken image on the heap. Of course, we know that Eliot himself eventually decided this was not the case -- that Jesus was in fact the real source of truth and hope that the voice in the poem barely dares believe possible.

These thoughts/feelings are not new to me. But lately, they have become rather overwhelming, and I am not doing a very good job of managing them or turning them to constructive purpose. And they also cause me to struggle considerably with 'Christian stuff': not, in general, with my desire to follow Jesus -- which if anything waxes strongest in the height of my world-weariness. But the things that rightly come along with that desire -- church, Christian lifestyle, 'being a witness' -- there are a lot of all-too-human factors tangled up in those which are, to me, a source of additional vexation rather than a comfort.

So I am fretful and discontented within the church. I struggle with what is taught, and what isn't taught, pronouncing everything dogmatic and narrow-minded or vague and unintelligible. I get cross with the songs, and with our determination to be 'contemporary' (contemporvant, even, ha) whilst continuing culturally oblivious. I balk at most of our attempts to interact with the world, despairing that our loudest statements always seem to be bold pronouncements of disapproval rather than bold gestures of radical service and compassion. And my failure to 'belong' comes up again and I lament that Christian fellowship seems as much a popularity contest as does secular social interaction, and one which I am no better equipped to 'win' (which is hardly surprising given my appalling attitude as documented here). Please don't misunderstand me -- I very much count myself an above-average-sized part of 'the problem', as I perceive it, but whilst this realisation does help a little to increase my tolerance and patience towards others, it mostly, at the moment, just contributes to my irritation with myself.

Peter wrote that we should always be "prepared to make a defense to anyone who asks [us] for a reason for the hope that is in [us]" (1 Peter 3:15) -- in part so as to give other people the opportunity to explore and experience that hope for themselves. Well, believe it or not, for all my (largely self-constructed) wasteland of internal strife I do have a hope in me, and that hope has a reason. That reason is not 'Christianity' as a group affiliation or a set of behaviours. To offer such an answer would feel like inviting the questioner to "come in under the shadow" of Eliot's "red rock": in and of itself,  'Christianity' has afforded me small comfort. My hope is Jesus -- God intervening in history, demonstrating His love for us, dealing with evil and brokenness, defeating death, restoring us to relationship, turning the world upside down and living out the description of a radically better way. I read the accounts of Jesus' life and teaching and I see wisdom and clarity and compassion and insight and humility; I see things which deeply trouble me subverted and answered to; I see somebody worth following, somebody worth trusting, the way through every wilderness, a refuge and a (non-'red') rock. And because of Jesus there is hope for the church, as well ... and hope for the world ... so that it is worth persevering and laying aside (with his help) my frustrations and learning to love as he loves and be patient as he is patient.

Well, there you go. I know I'm not the shining beacon of successful fruitful Christian living that might make other people think "wow -- I wonder how she got to be like that? perhaps I should become a Christian too". And I also very much recognise that others have faced far greater struggles than my own, and that my own are sometimes somewhat self-inflicted and indulgent. But in the various barren places that I've journeyed through (and I could do with the reminder at the moment) I've experienced an immeasurable difference as I've learned to cling to the reason for the hope that I have...


O God, you are my God; earnestly I seek you;
my soul thirsts for you;
my flesh faints for you,
as in a dry and weary land where there is no water.
So I have looked upon you in the sanctuary,
beholding your power and glory.
Because your steadfast love is better than life,
my lips will praise you.
So I will bless you as long as I live;
in your name I will lift up my hands. (Psalm 63:1-4)

Andrea Bozzola (Venezia, Italia) said…
Please, Carolyn, believe me. It's so incredible to read my same thoughts on the world... Especially linked to this passage of the Waste Land. You made me choose this masterpiece as my thinking companion during the next two weeks of traveling through Japan. Thank you. From an heartless atheist so cinic that milk sours in his presence! 😂
14 March 2016 at 02:47

Anonymous said…
This was a very powerful and interesting meditation. You are quite skilled as a critic, and I empathize with your struggles in faith, which are similar to my own.
20 April 2018 at 22:35

Chris said…
Thanks for this post. I am teaching the Wasteland (at a secular university), and am a Christian like you, and I really resonate with the way you encounter the poem. One thing I noticed, about the "red rock" is that is the Psalms, the rock metaphor is often coupled with the word "Redeemer." I wonder if Eliot is pointing to that language through calling the rock "red," as a sly illusion to this coupling.
19 November 2019 at 11:25

Carolyn Whitnall said…
Thank you, @Chris. I'm always glad when something I've written resonates with someone else! And I like your suggestion -- Psalm 19 is one of my favourites (if we're allowed to have favourites.)
19 November 2019 at 11:51

Drew said…
I see this was written 6 years ago, but God works in His time. I was just listening to a sermon on Isaiah 32, and was reminded of "The Waste Land," and a Google search brought me here.

You have woven personal truth together with biblical truth so beautifully: both are true and neither is to be dismissed. There is agony, and there is hope. There is trouble, and there is refuge. Christ DOES give us the victory, AND the heartsickness IS real. I am perhaps so touched because I so frequently find writers feeling that they can only affirm one to the exclusion of the other -- or perhaps because I still struggle to allow for both myself.

The way you ended this post perfectly encapsulates what I love about the whole thing: "But in the various barren places that I've journeyed through (and I could do with the reminder at the moment) I've experienced an immeasurable difference as I've learned to cling to the reason for the hope that I have..."

Carolyn Whitnall said…
Thank you, @Drew; what kind words to wake up to! God bless you too, and may that hope be very real for you today and always.
23 March 2020 at 01:33